Firefighting with helicopters on Samos island in Greece. July 2010 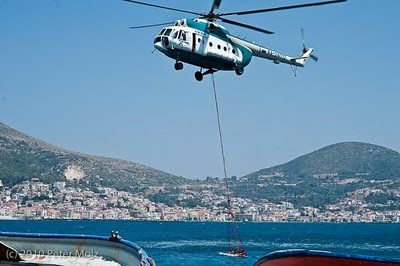 The months of July and August with high temperatures, dried-out nature and strong Meltemi winds are potentially dangerous with regards to fires on Samos island with its many forests and vegetation.

This year there have been fires already , e.g. the one of July 21st. Then, 4 helicopters and 6 planes were involved in the firefighting from the air helping many firefighters on the ground doing their job. 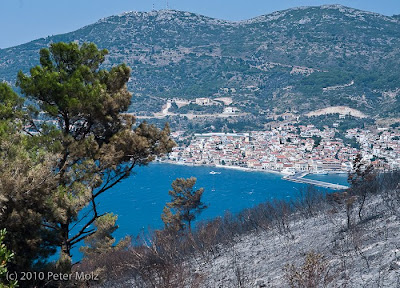 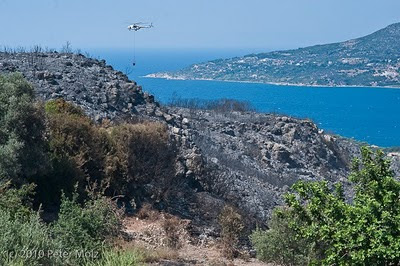 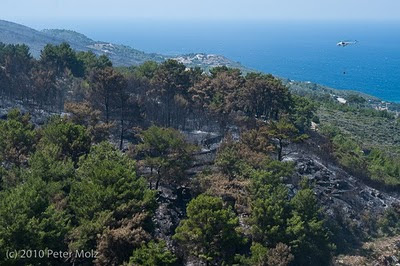 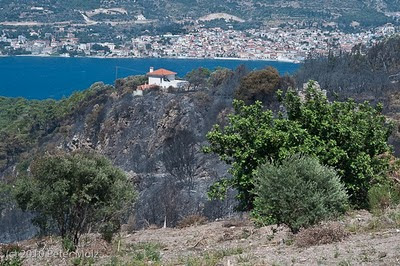 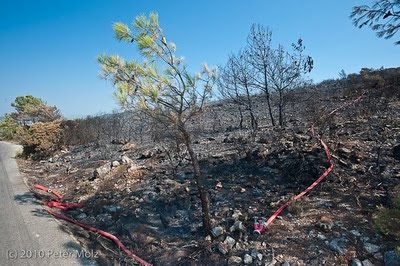 And just now, July 29th 2010, official and voluntary firefighters are struggling again against the long firefront of a big fire between the hills above Kokkari on the north coast and Mytilinii and Mavratzei in the centre of the island.

Here are some videos I took last week on the day after the fire of Wednesday, July 21st, 2010 :

Firefighting on Samos island in Greece. Helicopter coming down to the sea in the gulf of Samos near Malagari opposite the capital Samos-town to refill with seawater.

In the hills on the north coast close to Samos-town, above the road leading to the rubbish damp: helicopters are still flying and dropping water to control the area.

While it can be a life threatening experience to those whose properties or lives are on the risk and for those who fight the fires, it is always a pity too that more green spots will disappear from the map of Samos for quite some years. So, tourists planning to come to Samos should be aware that
- a lot of efforts have been undertaken to improve the firefighting considerably over the last ten years, especially on Samos island.
- the tourist resorts near or on the beaches in most cases are not endangered.

But looking at all those photos and pictures of forest fires on this beautiful island should bring immediately to each tourists mind too the responsibility to behave in a way to prevent any possible cause for a fire on Samos.
Posted by Peter Molz at 3:36 PM 1 comment:

Driving along country roads on Samos

Driving on the road on Samos island can be a lot of fun, especially in spring, when the countryside is full of blooming flowers and bushes. Here are three examples from end of May 2010:

a.) Going downhill from Ambelos to Ag. Konstantinos on the north coast (Parts 1 & 2 of 4):

The village of Ambelos high on the north coast of Samos and the road leading up there have already inspired many others to take videos. Here are two examples produced by samian "Youtubers":

Video of Nick Tsoulontino from February/March 2010: national samographic-Ambelos village and its Waterfalls:


b.) Driving along the road on the north coast of Samos in the Svala/Kampos region (part 1 of 2)

The other parts you can find easily in my videochannel on YouTube
Posted by Peter Molz at 11:21 AM No comments:

The Avlakia session: Cloud of Unknowing

The dutch musicians Ad Vanderveen & Kersten de Ligny and greek musician Dimos Kassapidis performing together, playing the song " Cloud of Unknowing".
Recorded "live", 10 meters away from the lovely blue waters of the aegean sea, in the small village of Avlakia on the north coast of the island of Samos, Greece, July 2010.

Despite wind jammer used, some wind noises due to strong Meltemi winds blowing. 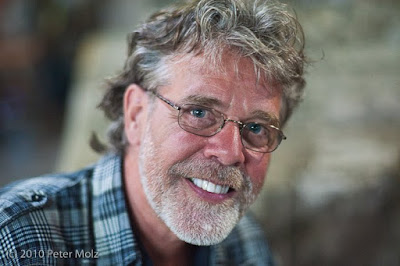 The two dutch professional musicians Ad Vanderveen and Kersten de Ligny came to Samos for the third time for a holiday. They fell in love with the island and became friends with the greek musician Dimos Kassapidis. Dimos came to know the music of Ad some years ago via dutch visitors on Samos island and is playing some of the songs composed by Ad.

Ad and Kersten have recorded several CDs and you can find videoclips of them on YouTube and Vimeo, e.g. this one:

This year, I met them on Samos for the first time during last week when they were playing at the Hotel "Doryssa Seaside Resort" together with Dimos.

Two days ago, on Friday night, they gave a concert with two sets in the restaurant "Archontóspito" on the square in Kontakeika. Unfortunately, a cool Meltemi wind was blowing strong. But nevertheless, all tables were occupied. And the greek audience liked the music. 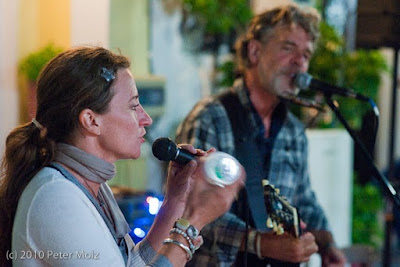 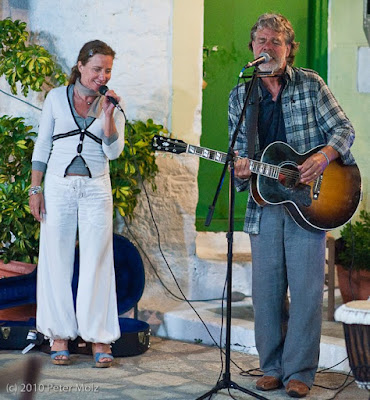 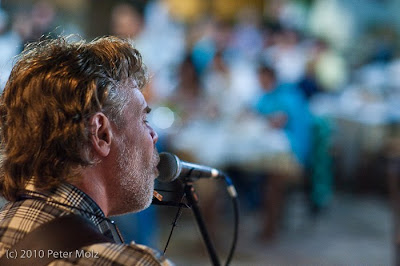 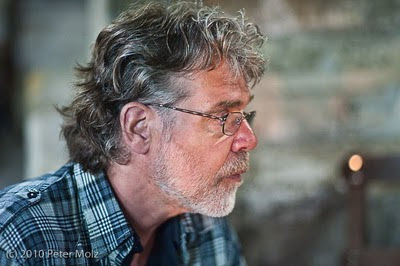 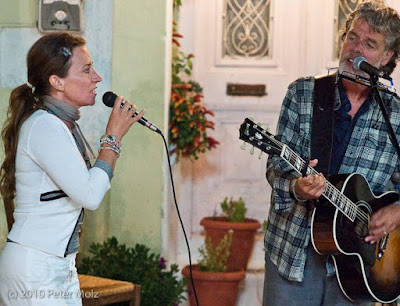 Besides Ad and Kersten, a young local greek singer was playing, the first set alone, then later in the night accompanied by two fellow musicians: 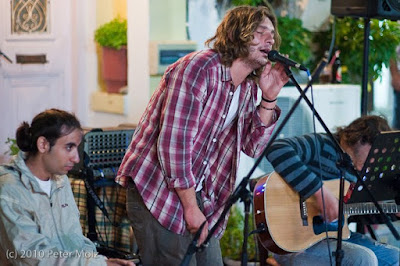 On Saturday we did some recording of a more or less spontaneous jam session in Avlakia on the north coast. Ad, Kersten and Dimos performed several songs, e.g. "This fleeting life", "Cloud of unknowing" and "If I needed you".
To get a first impression, please watch the following videoclip:

I will post some more material in a while.
Posted by Peter Molz at 1:22 AM No comments: