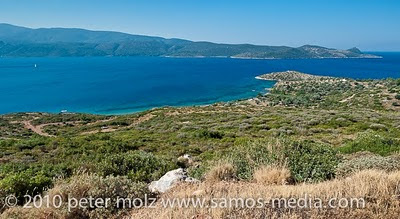 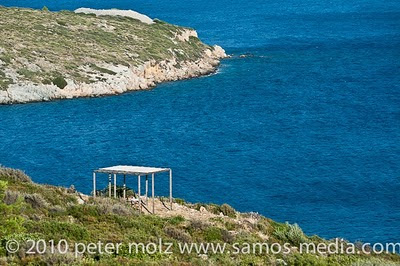 Warning: footage and pictures taken are no computer simulations! You are confronted with reality! 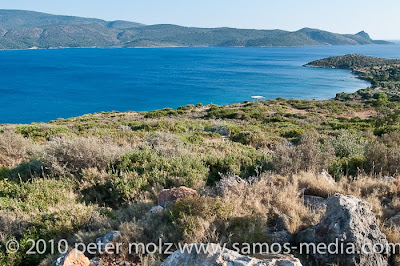 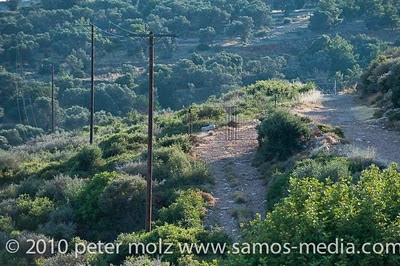 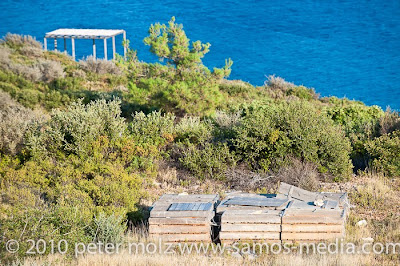 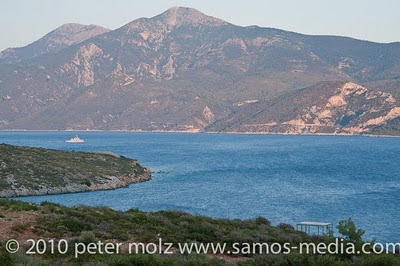 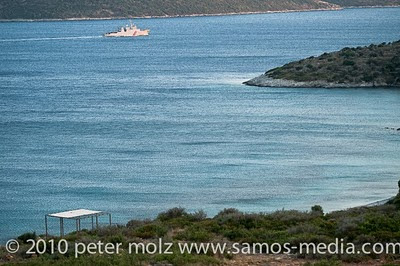 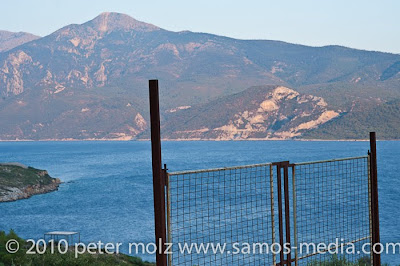 These are some phrases from advertisings over the last 2-3 years for the 'Halcyon Hills' project on the island of Samos:

".....It's rare to find a developer who has taken so much research and consideration into account before embarking on a project. .....
.... The complex is scheduled for completion two years from the commencement of building works. Completion is estimated to be in the first quarter of 2011.
....Construction will start in early 2009, and completion is scheduled for 2011."

Well, alright, lots of announcements and really nice virtual reality videos and pictures ....
Since I didn't have the time in 2009 to visit the area on the south-east coast of Samos, I called several people o Samos and asked them: "did they start the building activities there?" Answer: we didn't hear or read anything, so most probably they didn't start.

So what about a reality check visiting the area? In spring, summer and autumn 2010 I went to the area in the south-east of Samos on a motor scooter to see what was the status of the project on the site planned for the 'Halcyon Hills" resort, between Klima Bay and Akra Merziki.
I couldn't detect any building activities on the planned site!

What I already knew from visits there many years ago and what I found again on these several visits in 2010 was a beautiful and calm, almost silent natural area between Klima bay and Akra Merziki/Mertziki, where normally almost no tourist will go to because only really bad dirt roads lead there. The place looks like a big lake with the high mountains rising above the coast of Asia Minor giving it a perfect frame.

On the narrow shores (large pebbles) in this area you will find the remainders of boats, inflatable dinghies and life jackets of illegal migrants who crossed the strait between Turkey and Samos trying to enter the European Union. 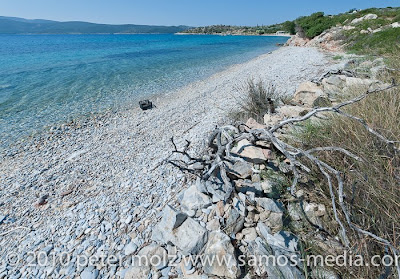 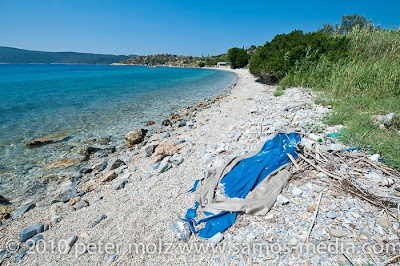 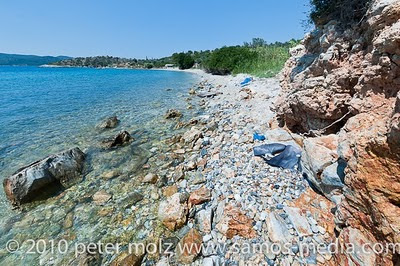 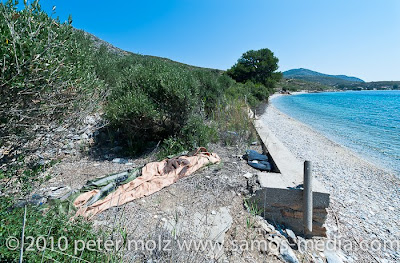 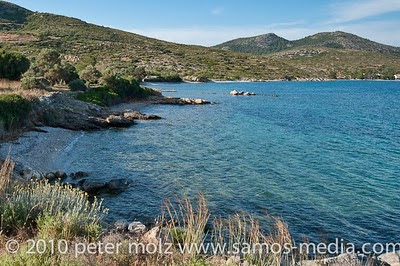 Here are some video sequences I took over there:

So, if you like Samos, the beautiful natural landscapes of this island and the sounds of nature, e.g. waves rolling on the shores of remote small pebbly beaches, you better go there before the british consortium will start the project. Because when they will start, the building activities will change irreversibly and forever this peaceful and calm area, the silence will be gone for sure! The size of the project is like implanting a completely new village in the remote south-east of Samos!

If you don't know about the 'Halcyon Hills' project, look for the site of Barrasford and Bird, e.g. this one. They think and are convinced:
"Samos has a blossoming tourism market but is in need of a truly luxurious five star development to satisfy the demand of the high-end traveller."

Reality check: due to several factors, tourism steadily - and in total significantly - declined on Samos island over recent years. While there is no doubt that almost nobody likes this situation and everybody wants tourism to rise again, so far, I haven't met anyone on the island who would agree or is convinced, that Samos needs a "truly luxurious five star development" for "high-end travellers".

Btw., thinking of a building project at all over there, why not build a much smaller "5 star" (lol!) monastery there, without a marina, where (rich) people can spend some time contemplating in silence trying to get rid of their circling thoughts on how to increase profit and what others (or they themselves?) really need? ;-) ;-)
Posted by Peter Molz at 8:36 PM

Now Mid November 2011 and still no sign of the Construction of the Halcyon Hills Luxury Resort starting. I'm astounded that there aren't a raft of irate investors complaining on the internet.

I imagine those patiently waiting for their Villas to be constructed are content as the Developer is paying them a monthly refund for sitting on their deposit money. One might ask where this money is coming from.

With the amount of infrastructure needed to get this project underway, water, power, sewage treatment, roads, marina etc, and the current state of the Greek economy, I just can't see this resort ever getting built. If that's the case, I hope the deposit holders get their money back!

I am an investor in Halcyon Hills and have started a Facebook page as a forum for investors to exchange views. Please join at https://www.facebook.com/HalcyonHillsInvestorForum#

The facebook link to the Halcyon Hills Forum doesn't seem to work.

Still no sign of the development at Klima starting. I wonder if Clients are asking for refunds, or whether they are content to just keep waiting?

looks about right! I heard that they STILL haven't built anything on samos because they spent all their money on their hotel in france which looks pretty shitty too and also isnt finished. seriously dont ever give them money.

All this negative speaking gets us no where, from what i see none of you even live on this island. During the crisis the people here are desperate for an investment like this to happen here. We need jobs and construction and i know this company wanted to give the island that. what has happened in greece is a tragady and we should be pulling together to help companys to invest here. This project is only being slowed up by beurocracy and the stupid minds in this country. shame on you for scaremongering, i for one want to see progress here because if you lived here day in and day out you would want a better future for your children and a way to pay your bills. Samos is being sold down the river and i aplaud barrasford and bird to continue trying to create something here. Please think about us residents of samos before you speak such rubbish. im sure you will post my comment so we see a fair representation of the situation.

I am one of the patient investors at this development who would like to meet / discuss with other investors regarding B&B and this project. I have started a Facebook Group and would like to invite any new members. This group will be locked/private to investor/owners only. Please email me on halcyonhillsgroup@gmail.com for login instruction. Please note this is strictly private for investors ONLY..

We now have a group of investors but would like others to join. Please email halcyonhillsgroup@gmail.com for further information.

Has any body got there money back ?