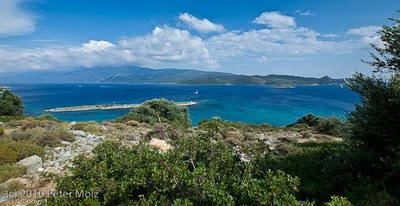 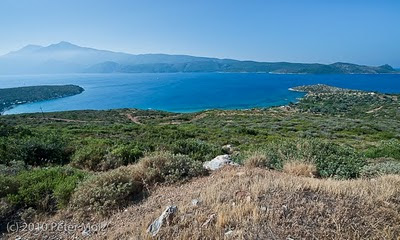 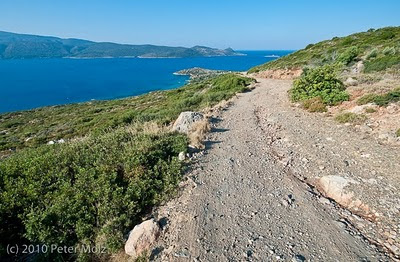 The strait of Samos or Mycale Strait (in greek: Stenó Sámou, in turkish: Dar Bogaz). Where Greece with the island of Samos is at its closest distance to Turkey in the aegean sea! 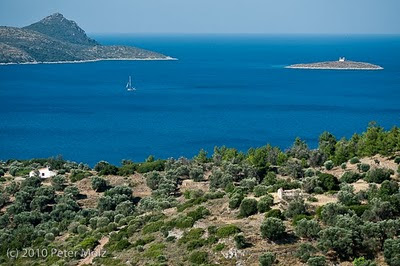 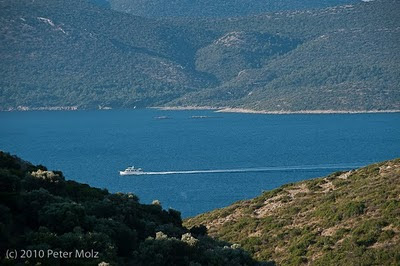 Along the south-eastern coast line of Samos, there are several bays. Three of them are easily accessible via asphalt roads. Besides the well known Psili Ammos Bay with fine sandy beach and several taverns and the picturesque bay of Posidonio, a less known place is Klima bay with a nice beach and two taverns (watch video below too!).

The Samos strait near Psili Ammos: 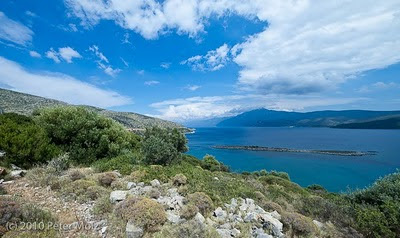 The Samos strait near Klima: 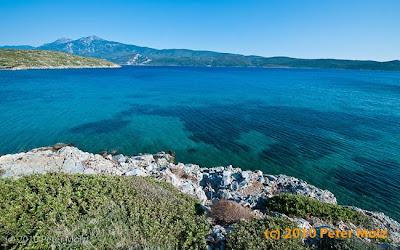 The Samos strait near Posidonio: 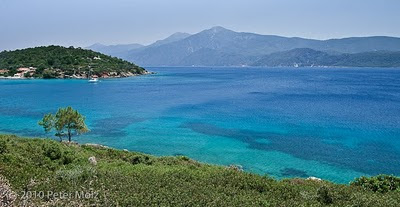 Only bad and dusty (or muddy after rain) dirt roads lead through the area between Psili Ammos and Klima on the south-east coast of Samos. Driving along there is rather adventureous, and it always feels like looking down on a lake, with the high mountains of the turkish coast on the opposite side. 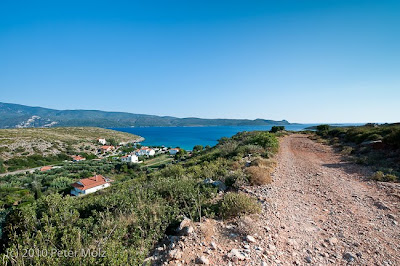 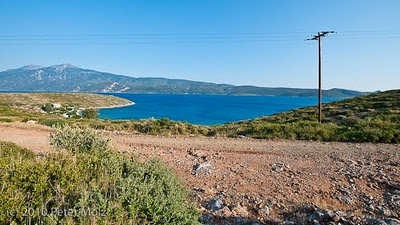 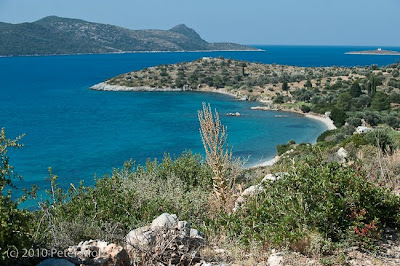 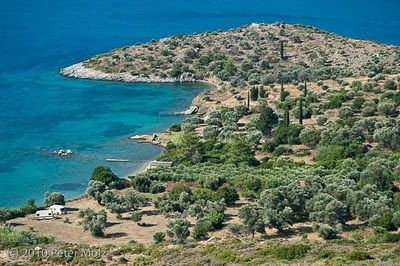 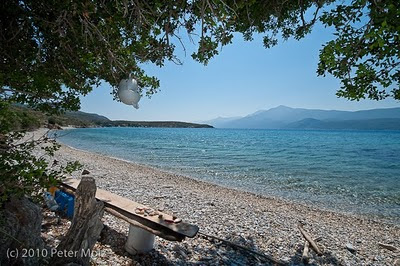 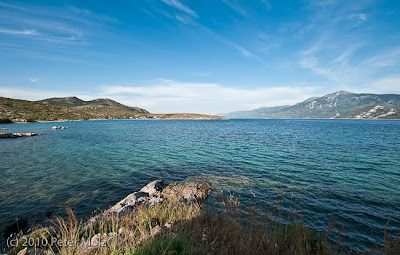 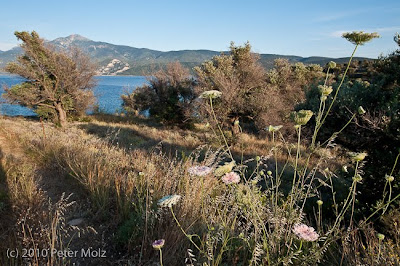 The western end of the strait of Samos. The small island (with a lighthouse) belongs to Turkey and is opposite of Psili Ammos beach. 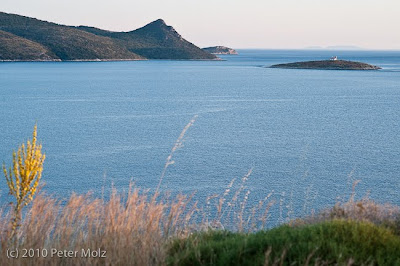 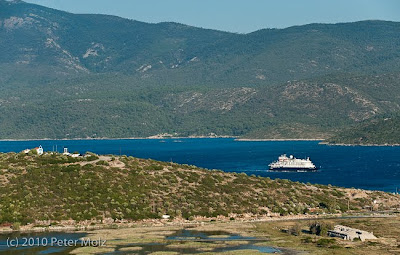 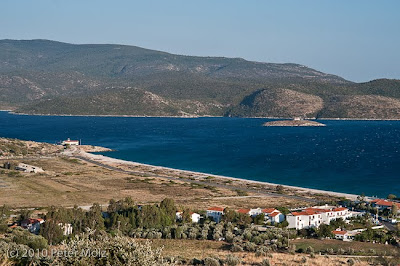 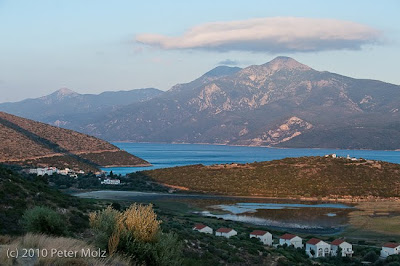 Sunset trip on Friday evening, captain Jiannis from Pythagorio with his boat Agia Irini is on his way through the strait of Samos heading towards a nice night with lots of eating, drinking and dancing in a fish tavern in Posidonio. 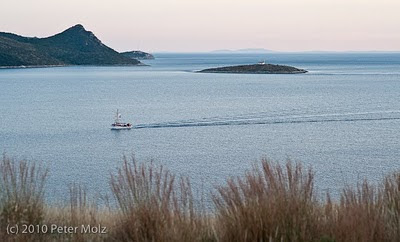 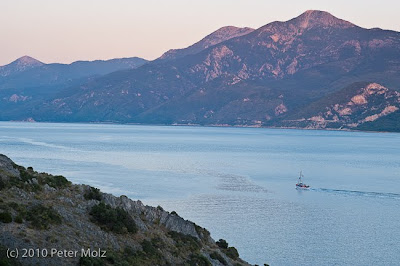 Some videoclips I took this year in the south-east of Samos:

Well, how narrow is this channel between Europe (Greece) and Asia Minor (Turkey) at its closest distance?

I’ve done some searches in the internet and obtained differing data. A range from 1,2 kilometers to approx. 2 kilometers is offered for the closest distance!

meandertravel says:
The island Samos lies in the heart of Central Aegean, 1200 meters from the shore of Asia Minor.

Many people with german websites just copy the text from the german Wikipedia site, which states 1,3 km. The english version of Wikipedia interestingly allows 1,6 kilometers for the closest distance!

The World Cruising Wiki says:
The Mycale channel, which is 1 nM wide, separates the two countries, ...

Partsafas K. Stillianos, head of the Samos port authority, is cited to have said:
“Samos is very close to Turkey. This is why we deal with so many illegal immigrants. At its closest point in the Samos Strait, Greece and Turkey have just 0.6 nautical miles between them,” ....

Samosin.gr site says:
„To the East of Samos is Turkey and Asia Minor, from which Samos is separated by the “Eptastadio” channel, (called Dar Bogaz in Turkish) whish is only 1650 meters wide at its narrowest point.“

I even found a statement saying this:
„In fact, Samos is only 2km from Turkey at its closest point, but to be honest, as far as I could see, Samos could be 2km of the coast of France for all the Turkish influence in evidence!“

Nowadays, Google helps us to find out ourselves what is the closest distance between Samos and the turkish coast.
And I remembered the sunset trip to Posidonio with captain Jiannis from Pythagorio where he always shows people in his boat this point on the south-east coast of Samos.

So, I marked two points on Google Earth in the area of the Samos strait which I think could represent the closest distance between the two countries Greece and Turkey. 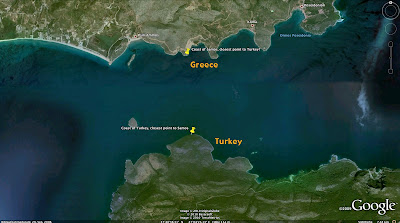 With these data I went to two different websites to calculate the distance.

with geo-tools/distance-calculator
I obtained 1675 meters.

Well, that perfectly fits the data given on that sailing site (1,68 kilometers)!

Thank you so much for these beautiful photos. Your work remarks the beauty of our island. Thank you!